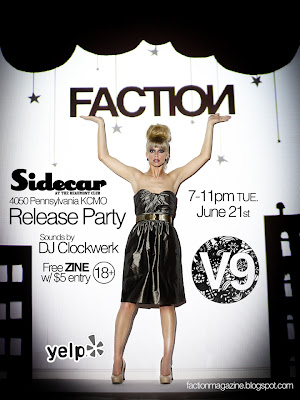 The party will include an exhibit of Angie Pickman's cut paper artwork
and sounds by DJ Clockwerk.

This event is sponsored by Yelp 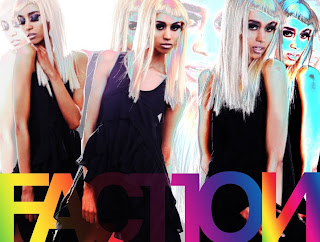 With multiple national shoots under his belt, Matt Mayfield is one ambitious Kansas City photographer. Aside from the work he has done for Faction V9, Mayfield has had the opportunity to have his work published in Vogue, People, Kansas City Magazine, Office Pro, and Spirit (the in-flight magazine for Southwest Airlines).

Though Mayfield is a self-taught photographer, here at Faction, we think he has been quite successful in the world of fashion photography. Having shot for Fashion Week in New York City, Payless, and a variety of local fashion designers and shows, Mayfield is most certainly a big part of the Kansas City fashion scene. He believes that the talented local designers and models are developing the Kansas City fashion industry from a “fashion oasis” to a “fashion Mecca.”

Mayfield’s’ interest in photography sparked from a unique moment when he was “looking at a bee through a viewfinder and clicking the shutter on an old camera my grandma gave me. The camera wasn't loaded, but it was exciting.” After this brief glimpse into the world of photography, Mayfield was hooked. He spent time photographing his friends playing dress-up, shooting street photography, and taking odd jobs. He bought “equipment here and there,” and eventually put together a portfolio.

With his portfolio and talent, Mayfield was able to land an internship with a commercial photographer where he developed his skills. He worked as an assistant at Hallmark and for photographer Richard McLaren, as well as a couple of photographers from Rolling Stone. Mayfield eventually built up enough clientele to begin freelancing and doing what he loves – “Anything that makes myself and others feel inspired and empowered.”

Mayfield sees Faction as a “driving force in the fashion cultural movement in Kansas City with great talent, photography and design.” We’re happy to have him in our V9 issue, and we’d love for all of you to come out to our release party on June 21st to take a look at his work!

Posted by FACTION MAGAZINE at 8:03 PM No comments:

Faction had the opportunity to follow her along her journey for the show and documenting the trip.
See Faction Magazine's very first written article by
Rachael Gardner.
This is an exciting new endeavour for us and we hope you come to the party, purchase a zine and read our very first article!
Posted by FACTION MAGAZINE at 9:47 AM No comments: