If you weren't at the event Sunday at Record Bar, you missed a GREAT time but most importantly you missed the amazing video that Faction Magazine worked on. Lucky for you we are posting it
HERE!
Thank you Outpost Worldwide and Brian Hicks for your awesomeness!
Posted by FACTION MAGAZINE at 3:59 PM No comments: 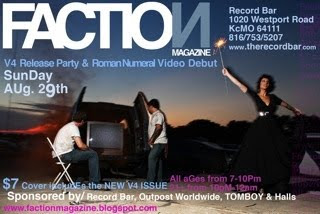 Check out the details of the outfits HERE!!!

BIG thank you to Halls and Outpost Worldwide!

Posted by FACTION MAGAZINE at 9:29 AM No comments:

Behind the Scenes of Faction Magazine V4 The Music Issue

Check out the behind the scenes of
Faction Magazine's V4 Music Issue!

Don't miss the party this Sunday, August 29th from
7pm-Midnight at Record Bar.

Olympic Size will play a special set, we will debut the new music video for the Roman Numerals and hear them play! Admission is $7 and includes a copy of Faction Magazine V4!

Posted by FACTION MAGAZINE at 1:57 PM No comments: 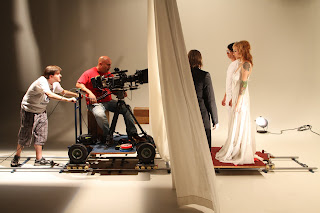 Working on a video is something I have always wanted to and with this issue of Faction Magazine, being released on August 29th, I had my chance. Faction Magazine and Outpost Worldwide worked some long, hard hours putting together a music video for the Roman Numerals’ song “This Motion”. I, along with Kristen Chumley my intern, was responsible for all the styling of the video which included creation of costumes, the clothing for the band, hair and make-up. I thought it would be interesting to talk to some of the people that made it all possible and see why they wanted to participate in the creation of the video.

CS/FM: What inspired the idea for this project?
BH/OW: This most definitely was inspired from many, many a night enjoying the sounds of the Roman Numerals as well as being a big supporter of the local music and arts community. When I heard there was a call out from the Roman Numerals to visual artist, I for sure came lurking around with interest. These guys have put so much into an aspect of the culture/counter-culture here in Kansas City that I gladly find myself participating in often. It is killer to be able to offer something back to the cause.

CS/FM: What are the pluses of working with Faction Magazine?

BH/OW: Faction brought a very high level of energy & resources into this project.

Their support and participation truly enhanced the life, spirit and style of this film.

The day I teamed up with Faction, they instantly proved to have an uncontrolled fire for what they do.


CS/FM: What are your thoughts on how everyone pulled together for the production?

BH/OW: Upon speaking with Faction about this philanthropic effort, there was instantly a synergy between myself & Faction. They brought the highest sense of attention to the idea and script while bringing their own creative ideas that benefited the entire creative process.

This project was done in a timeframe that was wicked fast, compared to the typical production schedule, without compromise. They were integral in splattering a thought from my mind onto the screen.


CS/FM: What do you think about creative outlets in Kansas City? Do you think people are approachable when it comes to working, promoting and helping one another in the art community?

BH/OW: I have always felt like the reason I’ve enjoyed and appreciated Kansas City so much is due to its energy and spirit. I have never lived in a city that holds such a unique support system within its arts community. This project is all about being a part of the community, working with like-minded people and promoting something bigger than just ourselves.

CS/FM: Have you ever worked on a project like this before?
TS: Not really, a very small bit part in Alacartoona's Night is the Mirror (where I first very briefly worked with Brian) and a very quick and dirty, no budget, make it up as you go video with my partner in (the) Medicine Theory for our song “I Killed Amanda”, which features both Erin McGrane and Christian Hankel of Alacartoona.

CS/FM: What intrigued you about this project?
TS: There were two aspects that really jumped out; one was the very vivid, lurid, and fluid imagery Brian was describing in our first meeting. I was able to latch on pretty quick and begin to conceptualize the world he was creating. The second was the very “non-band video” approach. No lip-synching, posturing or faux performance footage. And I don't know if it "intrigued" me into want to work on the project, but the song is just fucking awesome.

KC: I would love to do trend forecasting or styling. Traveling and analyzing street fashion and figuring out what trends will pick up and what won't sounds amazing to me. I would also love to style photo shoots for a magazine or some other media outlet. Working at Nylon magazine would be a dream come true. Styling a TV show or movie would be awesome. I also love getting people ready, so if there was some way I could do someone's hair and makeup and help them pick out an outfit to wear, that would be great. I want to be exposed to the fashion industry as much as possible so I can figure out what I'm good at and what I should focus on career wise. I want a job where I can work with creative people and beautiful fashion.

KC: Life after graduation is an open book for me. I want to move to New York with some Stephen’s girls but that's up in the air. After staying in Kansas City this summer, there is a part of me that would like to stay and try to help out the fashion scene here as much as I can. I've met so many amazing people trying to do so much for this city and I want to be a part of that. I'm going to see how my last year goes before I make any solid plans.

KC: Working on Faction projects has been so awesome. I've gotten to be a part of real photo shoots, not just stuff that my friends and I do together. I got to help style a music video which is huge. I've gotten to experience first-hand what the fashion scene is like in Kansas City. I've met an entirely new group of people and made some great connections. Working on Faction projects also made me realize that I really have been taught a lot in school. A lot of the skills I learned at Stephens have really come in handy. From patternmaking and sewing to fashion illustration and communication, I've realized I wouldn't have been prepared for this internship if I hadn't been at Stephens. I'm happy that I'm getting my Fashion Communications degree and motivated to learn as much as I can before I graduate.

KC: My final project for my summer internship was focused on styling a music video for Roman Numerals. I did research and compiled concept sheets. I sketched out designs for the outfits used in the video, sourced materials for the garments and constructed them. I sourced shoes to use in the video. I helped out during the two days of shooting. This project let me see first-hand what all goes into both a photo shoot and a music video. It was so neat to be on set and see stuff that I worked on being filmed.

KC: I loved the photo shoot on the set of the Roman Numerals music video. It was awesome to get stylish photo documentation of so many creative things happening at once. The hair, makeup and garments used for the shoot and video were awesome. It was so great to see how everything came together.

KC: I think that there are a lot of people in the Kansas City fashion scene that have a lot to offer. Fashion here isn't nearly as big as on the coasts, but it is still evident. The scene is growing and becoming bigger and better. There is a unique creative community here and it has a voice that needs to be heard.


Posted by FACTION MAGAZINE at 1:19 PM No comments:

WearHaus and Jeff Evrard Photography are excited to present the fourth issue of their magazine, Faction, at a release party on Sunday, August 29th. Record Bar, in Westport (1020 Westport Road, KCMO, 64111), will host the event from 7pm-12am. The party will feature 250 copies of the fourth issue of the magazine, which features local musicians, as well as back copies of Volume 1, Volume 2 and Volume 3, while supplies last. The celebration will feature DJ sets by Billy Smith, Steve Tulipana and Wade Williamson as well as live performances by Olympic Size and Roman Numerals. Brian Hicks of Outpost Worldwide will be debuting the new Roman Numeral’s video. This fashionable music event is open to the public and all ages from 7-10pm. Admittance is $7 and includes Faction Magazine V4!

Faction Magazine V4 combines several disciplines from many talented Kansas Citians. Faction Producers, Carman Stalker and Jeff Evrard, worked closely with video producer Brian Hicks to make his dark, lurid vision for the video a reality. Local artist Tyson Schroeder created specific art pieces for the project and also stars in the Roman Numeral’s video of their song “This Motion”. While shooting the music video, Faction not only photographed a spread for the magazine but also was responsible for the costuming for the production. Olympic Size is also a featured band in the magazine with an exciting “junk yard” spread that is sure to be unique.

Faction is a creative collaboration between Jeff Evrard of Jeff Evrard Photography and Carman Stalker of WearHaus. Faction centers on Kansas City fashion using local models, stylists, locations, clothing and hair and make-up professionals. The magazine is a bi-monthly publication focused on fashion photography and imagination. There is no written content in the zine but rather on the Faction Blog. The zine also features a back page advertising section for businesses that wish to take part in inexpensive marketing. Faction not only gives Evrard and Stalker a creative outlet, but also enables other locals to participate.

This is a great opportunity to network with local fashion and industry professionals, enjoy some amazing live music and especially, support all that is local!

Posted by FACTION MAGAZINE at 8:11 PM No comments: